I’m a big fan of the barbeque, old school, charcoal Weber to be specific. I purchased one in 2005 and have never looked back. In fact, I still have that original Weber kettle, with no immediate plans to upgrade it. It has served me well. So well that I’ve fired it up (quite literally) at every opportunity and cooked all manner of barbeque delights on it, including Xmas turkey for the past five years, once even in the rain. I could write an entire blog on charcoal bbq-ing, I might just do that, but that’s not why I’m here and this first paragraph is making me hungry, so I should get to the point.

What’s the connection between working more efficiently with Office 365 and a Weber bbq? Well, it starts at the top, the lid to be precise. Weber kettles had lids long before these fancy gas barbeques, and the lid is an essential item, as it keeps the heat and the smoke in as well as allowing temperature control, perfect for slow cooking or smoking. But the lid can be tricky to manage, or so I had thought, as I had this ongoing problem of where to put the lid when I needed two hands for cooking or taking food off the bbq. I didn’t want to put it flat on the deck, as due to a build-up of smoke and fat over time, the lid would leave a black circle on the deck that took a considerable amount of scrubbing and water blasting to remove. It was very tricky to turn, baste or remove meat from the grill with only one free hand.

In the end, I was left with two options, the first was to turn the lid upside down and lie it on its handle, thus preventing the deck from being defiled. Easier said than done, as the lid gets quite hot and with a small handle, it’s tricky to turn upside and place on the deck using one hand without the occasional reminder (by way of a burn on the forearm) of just how hot the lid gets. The second option was to ask a teenage son to come and hold the lid, thus freeing up both of my hands. However, this option was not without its disadvantages. Firstly, the long delay between asking a teenager for help and then seeing them emerge from the couch/bedroom/computer/headphones could have a serious effect on cooking times. Secondly, once said teenager arrived and held the lid while I worked the barbeque, my focus on the cooking was distracted by the question repeated with an almost metronome-like regularity of “How long do I have to hold this for?’

Then one day, it all changed. I was watching a YouTube video on how to cook a porchetta on a Weber and halfway through the video the presenter lifted up the lid and placed it calmly on the side of the barbeque, and there it stayed, by itself, freeing up both his hands. I paused the video and rewound it, more than once, I even slowed it down. There was no trickery involved, clearly though, there was some sort of hook-type apparatus that one could use to rest the lid on the side of the barbeque while checking or removing what was on the grill. I raced out to the garage, loe and behold there it was, on the inside of my Weber lid, the same hook-type apparatus that the guy on the video was using. A hook. The same hook I could have used for the past 5 years. My life changed forever. No more was I delicately trying to flip a hot Weber lid upside to place on the deck and then trying to pick it up with one hand without getting burnt.

It sounds silly, I know, but in fairness, the inside of a Weber lid is black and so is the hook, making it quite hard to see. The point is this, I was using the tool very inefficiently. Why? Because no-one had shown me that was a tool that would facilitate a better, less painful and more efficient way of using my Weber. 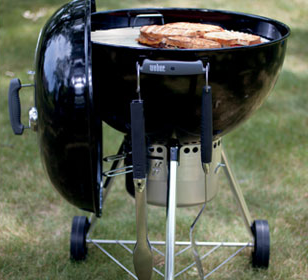 This is the connection with Office 365, although it’s applicable for most software packages. I’ve seen a number of organisations who have moved to Office 365 with no real noticeable change to how they are working. Everyone is still using Outlook, Word, Excel, and PowerPoint, the only difference is that now there are online versions of each application. Great. Documents are still being emailed for editing among multiple authors creating multiple copies, email is the only form of communication, and files are being saved in file shares or (even worse) on desktops. There are so many smart and efficient ways to collaborate and communicate as part of the Office 365 package, but most people don’t seem to be using them, simply because they are not aware of them.

Recently I was delivering a presentation on how to use Microsoft OneNote. At one point I wanted to show how to drag a file onto a OneNote page. To do so, I split the screen using the Windows key, left arrow trick, leaving OneNote taking up exactly 50% of the screen on the right-hand side and the rest showing the Windows desktop. I was about to drag a file from my desktop onto the OneNote page when I was interrupted by comments from the audience of “How did you do that?”. Initially, my reaction was to say, “Well I haven’t done it yet, just wait”, when it dawned on me that they weren’t talking about dragging a file onto a OneNote page, they wanted to know how I had split the screen into perfect symmetry with the press of a couple of keys. OneNote training was put on hold for a few minutes and I proceeded to show them all how to do it. This was a simple everyday trick that I used without even thinking about it. It’s more efficient to have two applications side by side on your screen than constantly minimising and maximising the two windows. I knew that, but the people I was presenting to didn’t. Why? Because no one told them, that there was a far more efficient and smarter way of working using this tool. 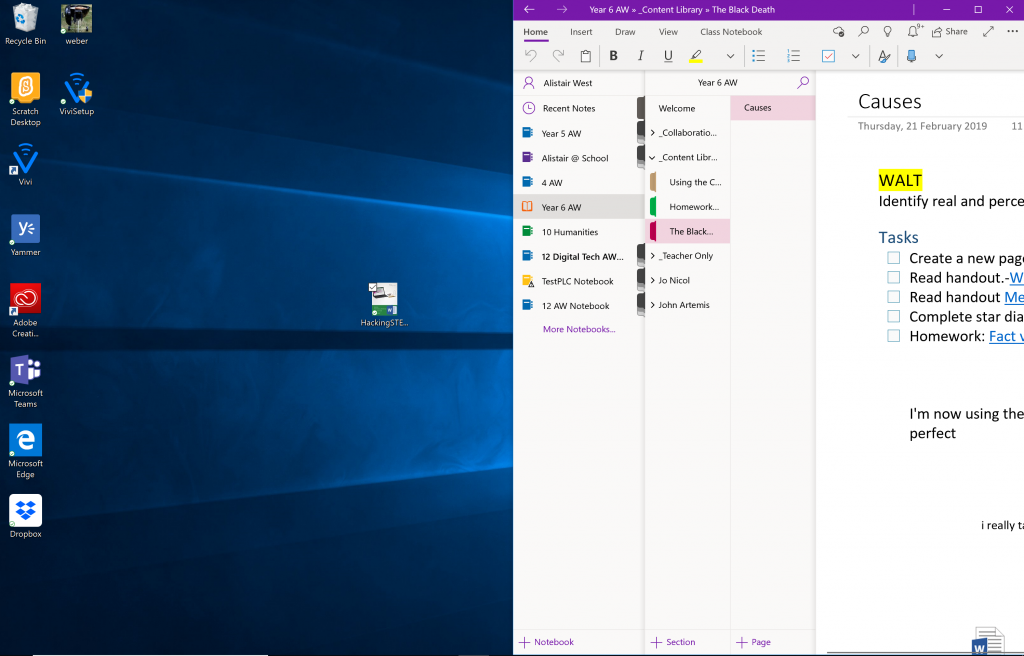 It really makes you wonder, what other tips and tricks are out there that no one’s shown you?